Blog / Industry News / Could Solar Power be the Most Dominant Form of Alternative Energy in Three Years?

Could Solar Power be the Most Dominant Form of Alternative Energy in Three Years? As the world continues to spin, it seems like each year humanity comes up with a new, clever way of harnessing the power of the universe. As far back as the 7th century B.C, however, humans have harnessed solar power and energy for use here on Earth.

Beginning in the early 2000s, the adoption of solar energy in the US began to take off. In fact, its production of solar energy increased by almost 50 times between 2008 and 2018—just ten years. When considering the earliest forms of solar energy (i.e. cavemen using glass to create fire), this most recent trajectory shows a promising development for its potential widespread use. While there are many factors which differentiate resources like oil and gas from solar energy, one stands out among the rest: these resources are finite. Unlike the unlimited power produced by the sun, as early as the start of the 1900s, national leaders feared shortages. Of course, at that time, the US still hadn’t discovered a significant number of the oil fields that it has today.

Nevertheless, OPEC’s 1973 oil embargo spelled bad news bears for Americans who were heavily reliant on oil. Moreover, the harsh winter of 1977 led to massive natural gas shortages. As a result, President Carter formed the Department of Energy whose sole focus was exploring alternative energy options. Since then, the playing field in the energy market has seen the introduction of many new players—none quite as promising as solar energy. A major factor shaping the landscape of the energy industry is, of course, politics. In the past few years, the US has suffered a trade war with China, leading to expensive tariffs on aluminum and steel which are essential to the survival of energy production companies.

As more information on the growing climate crisis becomes widely available, many Americans are looking to their elected leaders for a solution. Not coincidentally, the government has enacted key policy changes incentivizing increased production and adoption of renewable energies like solar power.

In 2006, the United States government passed the Solar Investment Tax Credit (ITC). With this legislation, businesses or individuals who invest in the creation of “solar facilities” receive a federal tax deduction on the cost of their project.

The Future is Solar

The public discourse is now shifting from saving the oil and gas industry to growing the renewable energy sector. Solar and wind energy are now the primary focuses of companies and policymakers looking to keep up with the times. While oil and gas industry leaders would have to make significant investments in adapting their plants and equipment to be able to harness solar power, the long-term cost of solar energy production is substantially smaller than traditional methods.

When comparing wind and solar power, the two major forms of renewable energy, solar stands out as the easiest energy to adopt. Because wind turbines must stretch substantially high into the air to generate the required amount of power, they are impractical for residential use. On the other hand, both commercial buildings and residential properties can install solar panels quite easily. Although they lose the valuable nighttime hours for power generation, the sheer number of solar panels which we can install may make up for this altogether.

Although it has a long way to go in dominating the entire energy industry (oil and gas still maintain an 80% market share), solar energy may soon be the biggest player in the renewable sector. While wind power had a larger market share in 2019 (24% vs solar power’s 9% share), solar energy’s practicality and adaptability hints that it may be the dominant renewable source by 2023.

At The Solar Guys and around the world, the future is looking up—literally!

In the solar energy industry at present, Solatube is the ONLY skylight that qualifies for … Read More

Solar Attic Fan vs. Electric Attic Fan: Which is Better for My Home?

Much “product advancement” nowadays could fall into the category of “one step forward, two steps … Read More

2020 Hurricane Season: How to Prepare Your Roof’s Solatubes and Skylights

With bad weather already on the way in Florida, The Solar Guys are happy to … Read More

I have three Solar tubes which has made a real difference in my house,making it much lighter. I thought I wanted another one in my living room and asked... Read More

The solar tubes were installed over a week ago. Following the installations we had a very heavy rain with high winds. No leaks what-so-ever. Read More

Rob did an excellent job. He was very informative and didn’t try to up sell me on options I could not afford. He was very clean and the quality... Read More

Larry is a skilled craftsman in this profession. As an example, he went up into our attic to make sure that he was installing our solar tube in the best position... Read More

Our contact with this business was professional and courteous. They looked into our needs, provided services and material that met those needs... Read More

Service was very good. The technician was able to do the install in a very cramped space. this is the third item we have purchased from the Solar Guys.

Our service man was most courteous and thorough. He was neet and left no trace that he had worked in the room. We are very satisfied!

We spoke about where would be the best position for the Solar Tube and since it was put in it couldn’t have been a better decision. He was clean and care of... Read More

The solar tubes are amazing, I did not expect the amount of light and that is a good thing. The tech was very efficient, fast and neat as he instaled our solar tubes... Read More

I was surprised by the easy phone ordering process and pleased with the quick appointment for installation. I received a “nice surprise” phone call... Read More 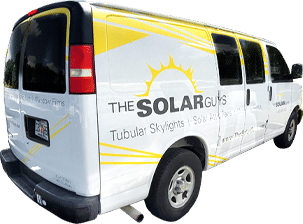 Schedule a free consultation with one of our highly-trained, certified daylighting experts.

We are roof and gutter experts too!